My cancer won’t stop me making my business a success Franchisee Rachael Coyne shares how she won’t let her cancer diagnosis get in the way of her life – or her business.

When people consider joining our business, one of the questions we hear most is “Can I do it?”.

Our answer is always the same: We believe nearly anyone can be a successful travel consultant, regardless of prior experience.

But, making a success of any business requires determination and effort, franchise or not.

Someone who epitomises courage, resilience and fortitude is our franchisee Rachael Coyne. She runs her Not Just Travel franchise with husband Colman, a former police detective.

Shortly after Rachael and Colman first started their business in 2013, she was hit with the awful news that she had cancer. With a teenage son and a new business, Rachael says it was the worst time of her life.

“Colman and I were terrified – we didn’t know what was ahead and felt scared for my life. My son Daniel was only 17 at the time and I couldn’t take the thought of him losing his mum so soon.”

Despite the news, they kept building their business part-time while Rachael underwent 5 months of gruelling chemotherapy, helping whenever she was able.

After a year, Rachael got the all clear. And thanks to their hard work, business was booming. It meant Colman could retire from the police 6 years early, and be earning more than his previous salary.

An inspiration to others

Over the past 9 years, Rachael has been an inspiration to many in our business.

Not only for her courage, but also for the way she’s built up a fiercely loyal set of customers. At the same time, she’s also provided incredible levels of support, help and mentorship for other new franchisees.

At the end of 2020, Rachael received the news that her cancer had returned. She explains:

“The tumour had come back. I’d always known it was a possibility, but I’d hoped I’d never have to go through it again. But I tried to stay positive, because that was all I could do. I just wanted to start a treatment plan as soon as I could.”

Rachael said that working for themselves was a major positive for the couple.

“I didn’t have to go off sick. Colman reminded me work was so much more flexible and he could support me whenever I felt too unwell.”

Unfortunately, Rachael received the news that her cancer was incurable and that she’d need treatment for the rest of her life.

True to form, she refuses to lose her positive outlook.

“I was absolutely devastated when I got the news. However, there was nothing I could do to change it. “There are lots of people who have to live with health conditions,” I thought, so I just had to get on with it and adapt.”

A business that’s more than a job

Her business is also something that is a strong anchor in her life. Despite everything, Rachael and Colman have seen it go from strength-to-strength as the world opens back up.

“I now have an injection every 3 weeks. And when I feel well enough, I get to work with Colman. It can be tiring working while I have cancer, but travel is something I’m passionate about. It’s the best job I’ve ever had, so I’m willing to put in the work.”

That hard work has clearly paid off, with the couple on track for over £2million in sales by the end of this year.

Making the most of life with a positive attitude

And Rachael is also determined to enjoy life to the full – including as much travel as possible. She told us:

“Now things have opened up after Covid we’ve got some trips planned to the Maldives and Tenerife – I can’t wait. There are dark days, but I’m keeping a positive mindset and I’m not going to let my cancer beat me. I’m still going to live my life to the fullest, despite my diagnosis.” 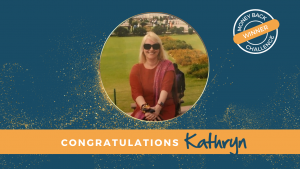 Kathryn wins the Money-Back Challenge working in her spare time! 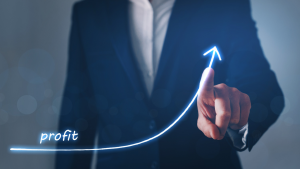 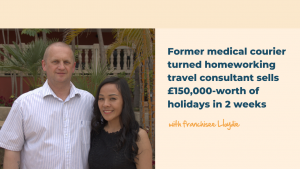